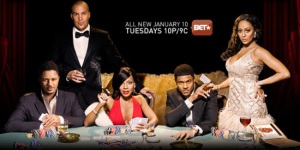 The anticipated season 5 of the Game recently debuted with high numbers but with not all positive reviews. Many felt that the show has become too crazy since it was revived by BET that it was TOO drama filled. The first episode had a dramatic fight with Derwin and Melanie over an abortion that ended with Trey who unknowingly is was the baby daddy of the aborted child getting knocked out by Derwin, Malik’s model girlfriend dying and being brought back to life by her drug dealer who charged them like $60,000, Jason meets a girl ends up in Mexico and marries her and admits his reason for not dating black women, ALL of this mess in an hour. NEEDLESS TO SAY they’ll need to slow it down a little for the rest of the season.I know they think the black cast (now minus Kelly who needed a’break’ of some sort) instantly=drama but it is a slight drama overload.