The most watched show in America just kicked off last week! There has been so many interesting and crazy people with amazing talent! 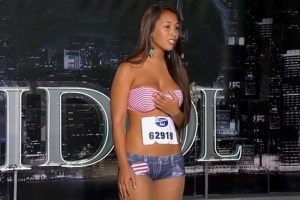 Ashlee introduced the world to the ‘Joy Hop’ and won a ticket to Hollywood her voice did not match the hot mess of her appearance hair net and two different shoes.


Kyle was amazing at the San Diego audition. His appearance definitely didn’t match his voice.
Also in San Diego was Jane Carrey Daughter of Jim Carrey. Many don’t think she’s that good and they find it unfair because they believe she’ll stay longer because her dad is famous. I’m not so sure. I found it strange that she said that she worked as a waitress on and off. She clearly is very grounded.
I loved Ali she was so charismatic. She rapped, ghetto danced, and sung. She told Usher and Mike Posner she had never been kissed in an Ellen segment and they kissed her! Genius