Occupy Wall Street 2 month anniversary was on the 17th and things got a little out of hand! Subway stops were occupied so people were unable to get places! This even continued on to the 18th! A man was arrested for saying that he was going to throw a Molotov Cocktail at Macys (thank God). I really am for this cause, but I feel like its turned too aggressive. People who are apart of the 99% and have jobs are being negatively affected. The subway occupation made people late for work, aggressively marching down the street and chanting is permitting people from getting where they need to go! Many who are not petitioning every day still support, but they have to work so they cannot be devoted 24/7 like others who may be unemployed. The 1% aren’t the ones riding the subway or walking on the sidewalks! Here are pics from 11/17 around 5pm on Broadway the NYPD escorting the demonstration were even wearing their masks! How can the cause be fought for in a productive way without causing mayham? 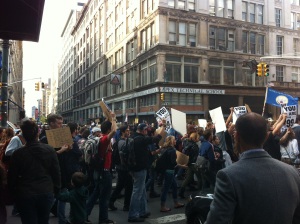