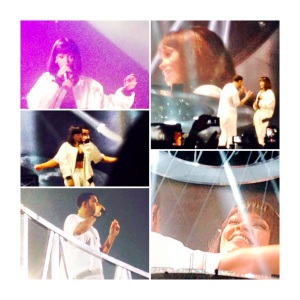 In February, I went to the Drake concert at Bercy. Looking back, it was an absolutely amazing experience to see my fav, in touch with his feelings rapper perform in Paris of all places! It’s just that the experience while watching the concert was quite intense. We got floor tickets and they had divided the floor into two sections and we happened to be standing at the barrier of the division. Long story short I left there brusied! I had a cut on my stomach and head, and sore foot for weeks lol!

The Weekend opened the show and he was great. During the set as well Jhene Aiko came out to duet with Drake. Soon after, Drake brought out Jen, Rihanna’s assistant to serenade her. I of course, recognized her and was beside myself! I knew RihRih was in Paris because Fashion Week was going on, but this was confirmation that she was in the building. This was also during her on-again tryst with Drizzy. A lil later, BadgalRiRi herself came out to sing “Take Care with Drake.” I was literally propelled into the fence with the crowds excitement lol I love her! Her bang bob is everything. She blushed at Drake which was so cute and then she sang “Pour it Up” What a beauty!!

I enjoyed the part of the show when Drake floats above the audience and points to people in the audience. I died when he stopped the track and asked the one person sitting down if they were ok and for them to stand lol (unlike Kanye in a similar instance, where the person was in a wheel chair, it’s so Drake to be concerned!)