The service for Whitney was sad and emotional as celeb friends and family recounted how her vibrant personality impacted them more than her astronomical talent.


The saddest moment for me was when they took her casket out to “I Will Always Love You” as they passed Ray-J, he broke down and wept he reached his hand to her casket as the line ” Please Don’t Cry” played. His sister Brandy comforted him and he slumped down into his chair as the casket moved and sadly turned in longing as the procession left the church.

The cause of death is “We had approximately a 60 percent occlusion in the arteries, in the narrowing of the arteries,” “So, that condition, complicated by the chronic cocaine use, all combined to result in her drowning. The final cause of death has been established as drowning due to atherosclerotic heart disease and cocaine use,” said LA Coroner Chief Craig Harvey. So Sad. They say that the combination of chronic cocaine use can cause heart enlargement and immediate affects of it, they said she used cocaine the day she died, can cause clogging of arteries and the heart to pump too fast so the combination could have caused heart distress and then from there she drowned. She was confirmed to still be alive when she went underwater. Whitney said in the infamous Diane Sawyer interview “Nobody makes me do anything I don’t want to do. It’s my decision; the biggest devil is me. I’m my best friend and my worst enemy.” ” I’m not a person who wants to die..” So tragic unfortunately nine years later it happened on its own. The report also said that Xanax and Benadryl and Marijuana were in her system, but did not contribute. Now the question is where is the cocaine? Where is the residue and paraphernalia? Who gave it to her? So many questions now arise. Did someone tamper with evidence by removing it from the room? 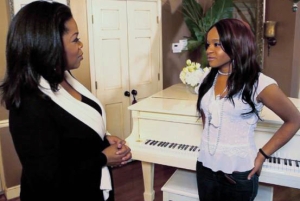 The Oprah Winfrey Interview with Pat Houston and Bobbi Kristina I found quite interesting. I personally think it should have been done now after the cause of death had been realized. When Oprah interviewed Bobbi Kristina I felt that they should not have been standing. Bobbi became fidgety. I think they should have rather been taking a walk or showing a kind way of remembering her mother. When Oprah interviewed Pat Houston and she said Whitney was chasing a younger man trying to live that lifestyle fingers were once again being pointed towards Ray-J. Pat though did say that she did not see how it was possible Whitney could be using drugs again in the time before her death because she was so busy. It’s sad that when someone’s addiction is so strong it can really affect the people surrounding them in such a way. She could have stated this because in her heart she believed Whitney was still clean and/or she was making herself believe this to cope with the struggle, or that she was really oblivious, but being always in such close proximity to someone who has battled drugs I would guess one could tell a relapse or see her doing or receiving the drugs. Whatever the case its really sad.

I am also confused about the claims that Bobbi Kristina is dating her “god/ semi adopted/ live in at some point?/brother” and possibly engaged? The tales get weirder and weirder.. I am happy that she is going to pursue music, but i hope she can live a life without the addiction that both her folks were afflicted with. I also don’t know how I feel about her still living in her Momma’s house by herself.

I also was beside myself when Gary Houston, Whitney’s brother, broke down while singing at the piano… such a loss
Now that the toxicology reports are out people are even more inclined to blame Ray-J. I don’t feel its appropriate to cause the blame to Ray-J when Whitney’s problems were way more than a decade old when they started “hanging out.” When coming home from the funeral he nearly collapsed in the airport and in doing in an interview seemed so distraught and confused and was advised by family to get counseling. It could be to an extent guilt, but then again all around her could feel guilt for being “unaware” of her illicit drug use, persription drug and alcohol mixing. Bobby Brown’s sister came forward saying it was Ray-j who gave her coke… Ma’am how you know? Then reports have surfaced about a sex tape between Ray-J and Whitney!!! He had to deny that as well. I just don’t think in the wake of such a tragedy we should put the blame on someone who was not there as a constant figure. Whitney was a phenomenally talents women with the disease of addiction, an addictive personality that unfortunately took the treasures life and she said herself that she was her enemy not anyone else. Hopefully the blame game will end.