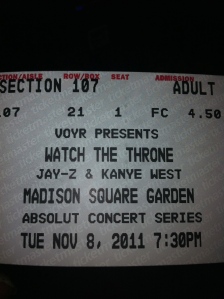 I attended the second night of Watch the Throne in NY at Madison Square Garden it was amazing!!!!
Unlike other rap concerts I’ve attended not all the audience was black. Jay-Z and Kanye are so marketable that they appear to all young, old,white, black, all kinds! Gayle King was one of the first artist I spoked in the VIP section! She clearly is a big fan, Oprah was in town as well but went to a charity event. I saw Diggy Simmons as well. When Melo walked in with Lala the whole arena irrupted in cheer and chants excited to be welcoming home their King! After the show commenced they snuck in Mama Bey as well! WAHOOO!!!! Ne-Yo and Estelle were some of the other stars there as well! I saw men in their suits fresh from Wall Street! Kanye and Jay put on a quality show unlike other rappers I’ve seen they came on stage presentable, not high, drunk, both, sans several hypemen! Overall I think other’s need to Watch the Throne for these too!
HERE ARE SOME OF MY VIDEOS I TOOK
*****WATCH AT LOW VOLUME********

NI**s in Paris!! They did this 3 times!!
They said Good Night, Left the stage, then came out again 5 mins later, and did Encore and a few other songs!
Here are some of my pics! 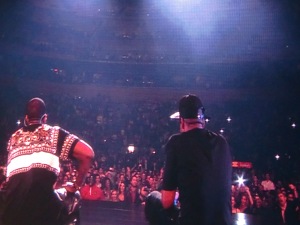 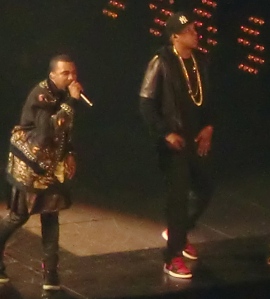