During Spring break, I went to Milano with my parents. I had seen pics of some of must-see sights, but it was even more breathtaking in person! We went on Easy-Jet which is a more affordable airline like Southwest that’s great for traveling between European cities. I love the feel of Italy!  I have a slight gelato addiction and the people are warmer. The first place we went to was the Duomo. It was everything and more. It is far more than your average cathedral. It is an off-white shade and upon closer inspection you can see that walls are compromised of small relief statues. 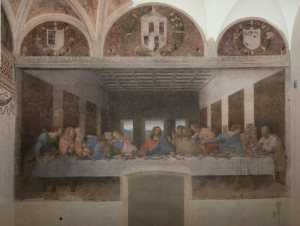 The first thing I did was go to see Leonardo Da Vinci’s the Last Supper. This is clearly one of the most famous paintings in the world and I was told by my professor it was a must-see. I was urged to book tickets to go and see it or else I would regret it. So I did. I found it interesting that a piece of work in a sacred place (its in the Convent of Santa Maria della Grazie) charged about $15 per person to see the relic. It’s crazy to think that this 15th century  interpretation of Jesus’s famous last supper has come to be regarded as the truth of the happenings of that famous meal. After we had lunch we had to navigate to the monastery with our lugage in tow. it took much longer than necessary and of course my parents were not pleased. From the beginning we should have just taken a cab, but we were told it was just a short walk, which turned into like 20 and asking people for directions who did not speak English. Eventually we just got a cab. When you get to the small church-like building, you enter the room in groups based off of your appointment time and you’re timed! They literally have a timer going for the amount of time you can take in the Last Supper. I’m not gonna lie I was slightly underwhelmed, maybe it was the long journey to get there. It is a large wall mural that was painted for the convent refractory. I couldn’t take in all in and read the information on it in the allotted time! Because of its age, it appears unfinished as some parts have faded, but its amazing that its over 500 years old! No photos were allowed to be taken. The first pic is one I got off the net that shows an acturate presentation of the wall painting. Below is the popular replica with more vivid colors and on a canvas that we’re used to seeing. Some much religious critique and scruntiny has been made off of this work that is just an interpretation, but it is still amazing none the less.